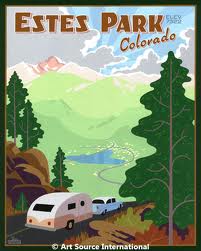 An earlier post promised that I would wax poetic about a mini-vacation my wife Barbara and I took in and around Rocky Mountain National park.  here goes.

On Friday last, July 26, 2012, my wife Barbara and I headed for Lyons, Colorado for Rockygrass.  If you've never been to this wonderful weekend of bluegrass and fun I highly recommend it.  I went to see Sam Bush, The Punch Brothers, but Trampled By Turtles, a group from Minnesota stole the show.  Think Flogging Molly blended on puree with manic fiddle playing and excellent vocals and songwriting.  These guys just blew me and the rest of the crowd away.

And the crowd at Rockygrass has the feel of family, tons of kids.  There's a river that runs through the festival grounds and everyone, especially as the heat of the day ratchets up, goes swimming.  Music playing, water cascading over mountain rocks, children laughing....and beer.  One great day.

The next day, Saturday, I had a signing at MacDonald Bookstore in Estes Park...sweet little bookstore in a wonderful town.  I admit it.  I love Estes Park.  Anyway, the signing wasn't until 2:00 so my wife and I hiked in the Rocky Mountains.  Oh my God, was it ever beautiful.  Smells, sights, sounds, the whole nine yards.  I had the best time.  At two, the sky darkened and I wondered if the signing would be a bust.  True, the streets were filled with those wonderful tourists spending their fabulous out-of-state money, but would they all go away once the rains started?

Once the sky opened up, the people poured into the bookstore, where I was ensconced in an overstuffed chair like a by-gone patriarch.  Folks seemed to need reading material and what's better than a signed book by a brilliant author, especially a Bonnie Pinkwater mystery.  Well, I might be biased.  The signing was not only a rousing success but a kick in the butt as well.

The next day we were off to one of my favorite places on the planet, Grand Lake.  Over Trail Ridge Road and the sights from twelve thousand feet down into a town surrounded by two gorgeous bodies of water: Grand Lake and Shadow Mountain Lake. 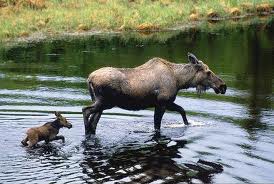 Last year, Barbara and I found this spot where a moose and her baby were just hanging out and enjoying a perfect day.  We remembered all the warnings about how crazy moose can be especially when accompanied by their young, so we stayed on the other side of the river from the pair...when they decided to cross over.  We stood behind our car as this mother (all serious and grand) and her calf (prancing around and full of the grace that new born things possess) passed by and barely gave us a second glance.

This year our ambitions were higher.  This year we wanted to see a bull, all horns and attitude. 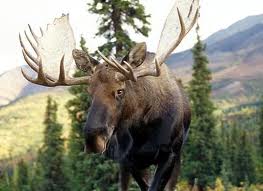 We got our wish in spades.  The first night we had seen nothing but a distant herd of elk and were heading out of Rocky Mountain National Park when we saw a crowd gathered by the side of the road. After we parked and approached we saw what all the fuss was about.  A family, a female moose, a baby, and giant honker bull were feeding down in a gully.  As he fed, the bull's antlers were causing the bush he was eating to shake like there was an earthquake going on.  I think I must have cracked my face smiling.  There aren't that many bulls in the park compared to females so we figured we had just got lucky and on the first at that.  Over the next two days we saw three more. One even crossed the road right in front of us.  His mate, a beautiful female, followed demurely even taking her time in the middle of the road as if to say, "That's right.  I am pretty and you're lucky to get to see me."

But the highlight of the trip happened on the last night.  Barbara and I decided to go to this spot in the park called the Beaver Ponds.  Misnamed because there were no beavers anymore.  We wanted to go there to watch the park grow dark after the sun went down.  We parked - all alone in the lot because it seems everyone knew about the lack of beavers - when first one then another elk came into the parking lot from the mountain meadow down below.  We watched with grins on our faces when one then another elk, some of them adolescents made their way into the lot.  Then we held our breath as a huge female moose entered.  At first she didn't seem to see us.  We had turned off our car not to spook the elk, so we sat there silently just holding our breath.  Then her head turned slowly in our direction.  She didn't look happy.

I remembered the warning signs and she had them all.

We were in a car, so we didn't think we'd get killed but she was a big one.  We also thought she would get hurt trying to stomp us into pesto.  She came within a few feet when I thought, "time to get out of Dodge boys and girls."  I turned on the car and she took a few steps backward.  I suppose I could have stayed but by now I had the feeling she had a baby hidden in the meadow down below and that made this evening belong to her.  This was her home.  We were just guests.

Posted by Robert Spiller at 3:30 PM